How Do the Courts Determine Whether to Split Student Loan Debt in Divorce? 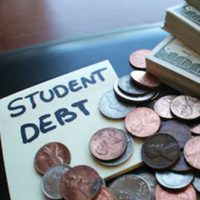 In general, yes, debt acquired before marriage remains separate property, and debt acquired after marriage is more complicated, and considered to be marital debt subject to equitable distribution in states like Florida. With equitable distribution, the courts review these issues on a case-by-case basis and make their decisions based on what is fair.

In looking at student loan debt that was acquired during marriage, specifically, they will likely look at the following factors:

How was the money used?

Were the loan funds put entirely towards your education? If so, the debt could be considered to be your entire responsibility. However, if any of the student loans were used to cover living expenses for you and your spouse, then it is more likely to be considered share debt that your spouse should also be responsible for.

What role did your spouse play?

If your spouse had a supporting role while you pursued your education, the court might consider them to have already helped with paying dues.

What kind of earning power do you and your spouse have?

If your spouse is making very little, courts may be less likely to hold them responsible for the debt.

Did you receive a degree?

In some circumstances, a degree earned during marriage is considered marital property, in which case, debt incurred while earning that degree is considered to be marital debt that is both you and your spouse’s responsibility.

Did your spouse co sign any of your student loans?

If they cosigned any loans, then they are legally responsible for a portion of them.

Courts can also look at a myriad of other factors in deciding what is fair in terms of the student loans, such as:

When it comes to figuring all of this out, the best thing to do is to simply consult with an experienced divorce attorney. They will also have connections to student loan experts who could help answer some very important questions.

If you have any questions about divorce and student loan debt, contact our experienced Orlando property division attorneys at the Arwani Law Firm, PLLC today for a free consultation to find out how we can help.