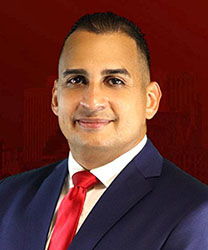 William Vásquez is a native of Queens, NY. He served in the U.S. Air Force from 2000-2007. He is a veteran of Operation Enduring Freedom and received the Joint Service Achievement Medal for his work as a Spanish linguist for the Defense Intelligence Agency in 2005. William graduated from Campbell University in 2007 with a degree in computer science. He earned his J.D. in 2011 from the North Carolina Central University School of Law. His practice areas include immigration law and criminal defense cases. He is licensed and in good standing with the State Bar of North Carolina and a member of the American Immigration Lawyer Association (AILA.) He is a proud member of the Charlotte community and provides compassionate counsel for all his clients.