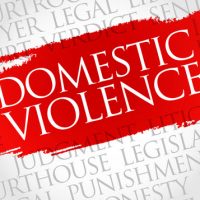 We call it domestic violence, but as this Huffington Post article points out, the name might contribute to the problem: “domestic” implies happiness and privacy; not something that should be made public. The article is written about the recent Texas church massacre, however, as many stories about these violent shooters turn out; it started with domestic violence and a serious pattern of abuse at home, and a series of partners who should have been legally protected from this shooter, but who were not.

The shooter—Devin Patrick Kelley—had a history of serious domestic violence; not only violently abusing his partners, but also strangling them (which research has shown is used by men who are much more likely to eventually kill their partners). A year into his marriage, Kelley had strangled and hit his ex-wife, as well as cracked open an infant’s skull. At the time of the shooting, he was reportedly involved in a domestic dispute with his then-wife’s family, and threatening them on a regular basis. And yet, it is unclear whether his victims had obtained an injunction for protection.

Domestic Violence Patterns: It Affects Everyone

With domestic abusers, there are always similar patterns: A strong need for control and the tendency to intensify violence when they feel like they are losing control of their partners. But there are also warning signs that tend to occur before a situation turns violent: convictions for domestic violence, rape, animal cruelty, a history of mental illness, etc.

Many mass shootings these days have some connection to domestic violence: Between 2015 and 2017, almost 60 percent of all mass shootings in the U.S. involved the perpetrator either targeting/killing an intimate partner or family member, or having a history of domestic violence. It affects everyone, and can also involve children getting killed.

Unfortunately, there simply aren’t enough resources for victims; especially those who live in rural areas.

If you are a victim of domestic violence or,

in fear of being a victim of domestic violence,

Domestic Violence Injunctions: Speak With One of Our Attorneys