How Does The Law Address A Pet Custody Battle In The Instance of Divorce?

How Does the Law Address a Pet Custody Battle in The Instance of Divorce? 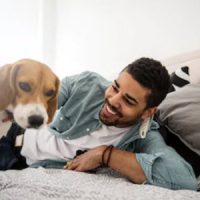 TIME magazine recently featured an article on what a prominent part of the divorce process pet custody proceedings now play; precisely because not enough couples address pet custody in pre- and postnuptial agreements. For many, their pets have essentially become their children, which means that if an agreement has not spelled out what happens with their pets, they can end up fighting over custody in court for years, and spend upwards of $40,000 figuring this out during divorce.

These disputes are becoming more and more common in states where, unfortunately, the laws simply have not kept up: In most states (including Florida), pets are essentially treated the same as property, which leaves courts ill-equipped to adjudicate these custody battles and makes the disputes more likely to turn into dragged-out fights.

Pets Are Now Family Members with Their Own Value

According to the American Veterinary Medical Association, 80 percent of pet owners consider their pets to be family members, and of the more than 1,000 millennial pet owners surveyed, almost 70 percent indicated that they would take time off from work to care for a pet if they could. In addition, 80 percent of women and 60 percent of men said that they consider their pets to be their “fur babies.” More and more pets are also now adopted from shelters instead of purchased from shops or breeders, and considered to be mutts, meaning that their value is linked to something other than how much they cost.

When a judge does not have a pre- or postnuptial agreement to refer to concerning pet custody, they typically assign ownership based on who adopted or purchased the dog, or if that cannot be ascertained, who paid for the care of the pet more often than not. However, some couples that have multiple pets have an interest in keeping the pets together if they developed a bond over the course of the marriage. As a result, if the couple makes a decision that they will take turns with sharing both pets in order to keep them together, but this is not solidified in an official agreement, the arrangement is subject to one person changing their mind, especially if one starts to feel that the other is not taking proper care of the pets. This is what often leads to an expensive court battle.

There is no question that pets are more than property. They have awareness, intuitiveness, emotions, and significant value. Still, unfortunately, the laws are lagging behind our own point of view and the place that animals have in our lives. As a result, failing to address pet issues in pre- or postnuptial agreements can not only result in pets being the most painful part of a divorce, but also the most expensive. As a result, many who have gone through pet custody battles have remarked that they would have had a change of heart, had they known.

There is typically something important enough in your life that warrants having a discussion with your partner about addressing it in a pre- or postnuptial agreement. If you have any questions, contact our Orlando divorce attorneys today to find out more about our services.