Can You Ask The Other Parent To Remove Weapons From Their Home During Custody Visitation?

Can You Ask The Other Parent To Remove Weapons From Their Home During Custody Visitation? 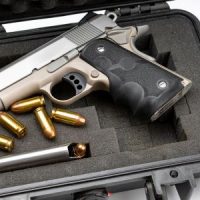 It is perfectly normal to be worried about your child’s safety when they spend time in the other parent’s home, especially if your former spouse has weapons in their home.

The lack of control during your ex-spouse’s visitation time can be frustrating, which is why many divorced parents wonder if they can ask the other parent to remove weapons from their home. If you are concerned about weapons in the other parent’s home and your child’s possible exposure to the guns during visitation, consult with an attorney to explore your options.

Contact an Orlando child custody lawyer to find out how you can ensure your child’s safety when they spend time with your former spouse who has guns in their house.

Thousands of children are killed by guns in the United States every year, and thousands of others are hospitalized with gun injuries. An estimated over 35% of Florida residents have guns in their homes.

As you can imagine, many Floridians who have guns also have children, which is why it is not uncommon for parents to be worried about their children’s safety when a former spouse has weapons in their house.

Can You Ask Your Ex-Spouse to Remove Guns from Their Home?

If your former spouse has firearms in their home, you may be concerned about your child’s safety during the other parent’s visitation time. For this reason, it is a good idea to contact a knowledgeable lawyer when drafting a parenting plan to address the issue of guns.

In some cases, parents can discuss the possibility of removing weapons from their homes to ensure their children’s safety without court involvement. However, if your ex-spouse rejects your request to remove guns from their home, you may want to consider including specific provisions in your parenting plan.

Your lawyer can help you draft a parenting plan that includes provisions requiring the gun-owning parent to follow specific state laws for safe firearm storage to prevent your children from accessing the weapons.

For example, Fla. Stat. § 790.174 requires people who own guns to store firearms in a locked box container in a safe location or secured with a trigger lock if the gun owner reasonably knows that a person under the age of 16 could gain access to the firearm.

Failure to comply with the above-mentioned statute can lead to criminal prosecution and serious penalties.

Can a Florida Court Require a Parent to Remove Firearms from Their Home?

Yes, certain persons are prohibited by Florida law from possessing weapons. It is illegal in Florida for convicted felons to possess guns unless they have had their civil rights restored.

A Florida court may also require a parent to remove firearms from their home if the child has a mental illness or had a history of suicidal thoughts or problems with substance abuse. If you are worried that your child could gain access to firearms in the other parent’s home, consult with an attorney to discuss your options.

Our Orlando child custody lawyer Rania Arwani is prepared to help you draft or modify an existing parenting plan to ensure your child’s safety during visitation. Call 407-254-0060 to get a case review.